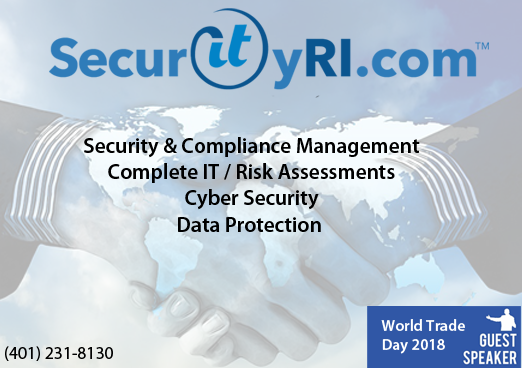 SecurityRI.com is proud to announce our technology team will be attending and speaking at the 33rd Annual World Trade Day: Technology in Global Trade on Wednesday, May 23, 2018. World Trade Day is presented by the John H. Chafee Center for International Business and is one of the region’s largest international business conferences, with more than 500 industry leaders and business executives expected to attend.

As Bryant University states – “Each year at World Trade Day, keynote speakers, workshops, and panel discussions provide high-level insights and thought-provoking discussions on future trends and economic drivers. With this year’s focus on Technology in Global Trade, experts will discuss innovations in manufacturing including robotics, drones, and other technological advancements. Attendees will learn about the use of big data and analytics to drive strategic decision making, as well as ethical considerations in data mining practices. Other featured topics include block chain technology, cybersecurity, and global logistics.”

Our topic / focus will touch upon:

In closing, the goal of World Trade Day is to bring together experts and leaders to share knowledge, vision, and opportunities for growth and success within the global marketplace. That’s why SecurityRI.com has been invited to advise on the complex issues associated with both personal and sensitive business data, including its collection, use, storage, disclosure, transfer and destruction.