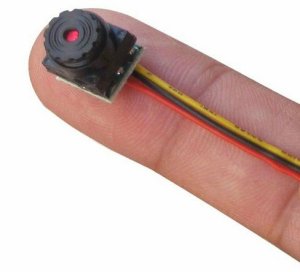 Depending on the application purpose, indoor cameras are for the most part stationary as opposed to moveable or controllable (Pan-Tilt-Zoom or PTZ).  Indoor areas, with the exception of large warehouses and storage facilities, are generally small hallways and rooms that can be successfully captured with a stationary security camera.  Stationary security cameras are generally less expensive than controllable units and maintain a high rate of quality, especially the pro box and bullet styles typically found in banks and convenience stores.  Although it is a more expensive option, if the security camera use strategy requires optimum sight in dark environments, then an infrared security camera would be the ideal choice.

The type of security camera is contingent on the size of the property which the organization or residence is located which is to be captured on surveillance video.  For many outdoor applications, a dome style camera is ideal because it has a wide range which can be picked up on the surveillance footage.  Another benefit to dome style cameras is that many of them are PTZ capable and can be electronically controlled by somebody such as a private security officer.  PTZ dome outdoor cameras are the most effective because the application of the camera can change based on the scenario and a greater area can be seen.  Additionally, if a perpetrator is seen on camera, the operator of the security camera system can follow the wrongdoer while simultaneously updating the local police department on the situation.  Once again, if nighttime security is a priority for a security camera use plan, then infrared is the way to go.

With the constant improvement of technology, hidden cameras have become smaller and more effective than ever.  Cameras can be disguised as birdhouses, rocks, lights, outdoor temperature gauges, and clocks.  With such an array of possibilities, this allows for creativity.  Most hidden security cameras are wireless to provide greater concealment and camouflage.  Wireless cameras may sacrifice some quality, but wrongdoers can still be identified.  This can work well with a company who suspects its own employees to be stealing company assets and property.  Security is not only a threat from outside perpetrators, but also common folks who are least suspected.

Sometimes video surveillance does not deter acts of wrongdoing from taking place.  Such perpetrators will seek to conceal their identities from security cameras.  Having a security camera that records audio as well as video can help catch the suspect.  Audio capability allows security personnel to identify languages spoken, any personal information that is mentioned, and also key characteristics of the wrongdoers such as accents and speaking impediments.  This allows for a more successful reporting to the local police department which will lead to more successful investigations.