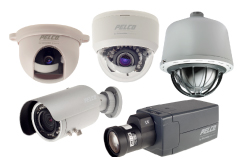 Living in a society where technology is constantly being improved and security is a top priority, the evolution of the security camera has been exponential.  When security cameras first became popular in the 1970s, the quality was poor and VCRs had to be used to store the video data.  Nowadays, there are wireless cameras with high-definition capabilities that are stored virtually on a cloud database.  With so many different types of security cameras, it can be difficult choosing which is best for your specific application.  Usually, a Closed Circuit Television (CCTV) security camera can be wired or wireless, infrared or normal, dome or pro box/bullet style, and pan-tilt-zoom (PTZ) or stationary.

A wired security camera typically requires more effort to install because the wires must be setup appropriately.  Wires are usually routed through walls so that the appearance of the security camera is improved.  However, the benefits to choosing the wired option are that the run off of electricity rather than a battery and the video quality is superior because the signal travels through a direct connection rather than a virtual connection.  If the goal is to install a hidden security camera, then wireless is usually the better option because wires will not give away the location of the camera.

A dome security camera is a spherical design that can be tinted to hide the direction in which it is recording.  Dome cameras are a more modern design than the pro box/bullet design, which is a model that looks like an old-fashioned camcorder and is typically affixed to record one specific location.  Pro box/bullet security cameras are typically found in banks, supermarkets, and convenience stores and can only be rotated by the physical movement of their structural setup (stationary).  Dome cameras are typically electronically controlled (pan-tilt-zoom) and have a wider sight range.  However, a pro box/bullet style security camera usually provides a clearer video recording than a normal dome style camera, but not an infrared dome style camera.

A stationary security camera, such as the pro box/bullet style, can be a useful deterrent because it is focused on one specific area and has excellent video quality.  A PTZ security camera works extremely well with an on duty security guard because these cameras can be electronically controlled with a remote control.  These cameras can be set to automatically rotate as well.  Having the ability to adjust a security camera allows the video to remain focused on an individual who may be engaging in criminal activity, which allows the security officer to provide a more useful description and evidence to the local police department.  Many claim that PTZ cameras are worth the additional investment.  Regardless, it is important to determine which type of security camera is best based on the environment and organization.