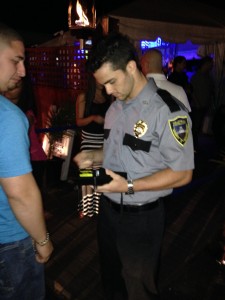 A nightclub is an establishment which typically serves alcoholic beverages and offers entertainment opportunities for the public.  Whenever alcohol is served, especially at night, there is likely to be individuals who become overly intoxicated.  An entertainment environment containing drunken partiers calls for a dependable and responsible nightclub security team.  Nightclub security services are most effective with the help of a licensed and certified private security company.  Private security guards engaging in nightclub security services help to prevent underage drinking maintain a safe and secure environment for all.

One of the most important aspects of nightclub security is preventing people under the age of 21 from obtaining and consuming alcoholic beverages.  A security guard can be responsible for ensuring that incoming customers are of legal drinking age.  Additionally, uniformed and badged private security guards naturally prevent the use of fake identification cards because the guard’s appearance is similar to a police officer’s.  Training can be provided by the private security company in recognizing fake ID cards.  Overall, private nightclub security guards will protect against legal liability issues created by underage drinkers.

Ensuring a Secure Environment Inside of the Nightclub

Protecting People Outside of the Nightclub

Individuals leaving the nightclub are naturally subjected to criminal activities such as assault and battery, burglary, theft, and larceny.  With many nightclubs closing between 1:00AM and 2:00AM, parking lots and streets are still dark which offers great concealment for a crime to take place.  Furthermore, with most people leaving the nightclub under the influence of alcohol, criminals are likely to take advantage of a person’s lack of awareness, judgment, and mobility.  A nightclub security guard would be able to protect people leaving the club from criminal activities, especially those club-goers who are alone.  The guard can walk with these individuals through the more dangerous areas outside of the nightclub.  Nightclub security keeps people protected and secure while showing the customers that the safety is a top priority.

Aside from offering physical nightclub security services, private security is a great resource for both customers and employees.  Private security guards are happy to answer any questions concerning a person’s overall experience at a nightclub, which can be redirected to the client.  Also, every state has different regulations addressing the powers and limitations of private security guards, which each guard would be happy to explain to a concerned individual.  The private security company providing the guards should maintain continuous communication with the nightclub regarding the quality of services and the overall safety of the facility.  Finally, customers at a nightclub are more likely to return to a club which puts their safety first.