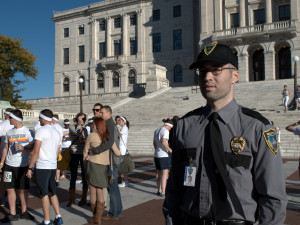 Founded in 1636 by Roger Williams, Providence, Rhode Island is one of the oldest cities in the United States. Providence is the home to approximately 178,000 people and also contains countless public and private organizations. The Providence Police department is the local public safety agency responsible for enforcing laws while protecting and securing the people within the boundaries of Providence.

The Providence Police Department has just over 400 sworn police officers; the lowest that number has been in over 18 years. According the a report published by the Providence Police Department, in the first quarter of 2014 there have been 170 violent crimes reported and 1,418 property crimes reported, which is an increase from last year’s numbers. With criminal activity statistically proven to be on the rise in Providence, a shortage of police officers increases the need for private security guards throughout Providence.

If a private security guard is not present or monitoring a location in Providence, then vacant buildings and property can become targets for people who wish to trespass and commit crimes.  Providence residents who do not have a place to live will usually look to these buildings for shelter. Gangs may choose a vacant building to hold secluded meetings in order to discuss criminal activity.

A company is more likely to be victimized in geographic regions where the crime rate is higher and when the business is not well protected. When companies are victimized, it is reported to the Providence Police. The understaffed Providence Police Department will most likely not be able to offer adequate protective and security services like a private security guard.

Victimization of a business can create setbacks of with both finances and general operations.  Everything from broken windows and doors to stolen computers and expensive metals can be deterred with a private security guard on site. Protecting assets after a business has closed down for the day can be efficiently maintained with private security guard services while also providing the employees with peace of mind.

The Providence Police Department will conduct both sporadic and routine patrols throughout the city of Providence. But there is only so much ground that the officers can cover. If a neighborhood is experiencing disturbances and criminal activity, then a uniformed private security guard in a labeled security vehicle can help to deter unwanted behaviors.