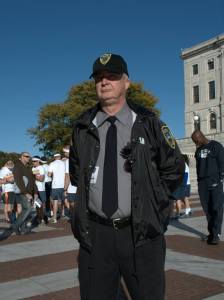 There are individuals, neighborhoods, and organizations in need of private security services all over the world.  However, many of these people and companies do not want any type of firearm to be at the premises that are in need of security.  There is a great need for unarmed security services, yet there are private security guard companies that remain hesitant to accept such a condition due to the potential safety risks it puts on the security officer.  With an above average job mortality rate, the firearm is usually for the safety of the security guard for situations involving self-defense from severe and imminent bodily harm.  Effective private security services help to deter criminal actions from occurring at the client’s location.  This mission can still be accomplished with unarmed security guards.  There are many factors that correlate to deterring criminal wrongdoing from occurring at a specific location.

There are several factors about a private security guard’s uniform that can successful deter wrongdoers from committing illegal acts.  The first element is the overall presentation of the uniform, which should be as professional as possible.  Security officers should be making sure that their shirts are neatly ironed and tucked into tidily pressed professional pants at all times while wearing either black sneakers or dress shoes (depending on site requirements and the company’s policy), ensuring visibility of badges, and following the special uniform protocols determined by the service contract.  If the contract requires a suit to be worn, then the suit should be neatly pressed, the collared shirt should be clean, shoes should be polished, and appropriate tie should be properly tied.

Private security guards’ wearing modern uniforms can often be confused by the general public to be members of a local police department.  Modern uniforms include radios, badges, ranks, decals, and duty belts.  There is a tactically specific reason for this.  Generally, research points in the direction that the more similar a uniform of a private security guard is compared with the uniform of a public police officer, the greater the natural effectiveness of deterrence.  Deterrence may not be greatly affected by whether or not there is an armed or an unarmed security guard because the uniform, badge, and overall uniform presentation are useful deterrent factors.  Even though the guard may be an unarmed security officer, a potentially violent wrongdoer can still be deterred by proper display of the uniform.