What the Events in Ferguson, Missouri Have Taught Us about Private Security 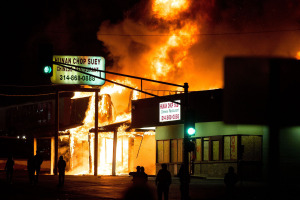 In the United States, there are always going to be controversial events which occur.  When the results of these controversial events are established, there will always be both public agreement and public disagreement.  The more controversial the event is, the more intense the reaction will be from the public.  The shooting of Michael Brown in Ferguson, Missouri was one of the most controversial that has recently taken place and was discussed in the media every day ever since the event occurred back in August.  When there are events that could result in the public becoming angry and upset, leading to rioting and dangerous protesting, there is a greater chance for wrongdoing, which increases the need for private security services in affected areas.

After the grand jury established that Police Officer Darren Wilson will not be charged in the controversial shooting, Ferguson erupted in violent and destructive protest.  In Ferguson, fire was set to a number of both commercial and residential buildings and structures, leading to an increased safety risk and financial loss for occupants, business owners, and rest of the public.  Also in Ferguson, stores were looted and trashed, leaving helpless business owners without the ability to successfully operate their businesses.  People are scared, buildings are destroyed, and the community feels unsafe.

Controversial events have the ability to make all people, good or bad, do terrible things, as evident by the events that took place in Ferguson.  The police in the area attempt to maintain order and public safety.  However, when there is complete and sheer chaos taking place in the streets and on private property, law enforcement could use some assistance with keeping the community safe.  This emphasizes the importance of the role of private security guards in protecting private property from unlawful acts.

A Need for Private Security

Although controversial events like Ferguson will continue to occur in the future, that does not mean that we must suffer the same consequences each and every time.  Organizations who are in larger metropolitan areas should consider partnering with a private security company to help keep the communities safe.  Metropolitan communities are most at risk for the aftermath of controversial events which may include dangerous, destructive, and violent riots.  Although there will be many who choose to peacefully protest, there is no guarantee that these people will remain peacefully protesting.  Once a group begins to act unlawfully, other individuals are more likely to join that group in such unlawful activity.