Terrorism is Increasing the Need for Private Security 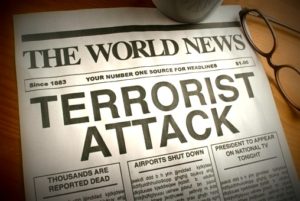 The War on Terrorism

Although the war on terrorism has been going on for years, we are still at risk. Al-Qaeda’s leader Osama bin Laden, the orchestrator of the 9/11 attacks, has been assassinated, but an arguably more radical and more powerful character has emerged.

Abu Bakr al-Baghdadi is the leader of ISIS. He was removed from Al-Qaeda for essentially being “too radical”. ISIS is influencing the youth by poisoning their innocent minds while spending hundreds of millions of dollars on training and attacks.

How Can Private Security Help to Stop Terrorism?

This is a team effort. The public sector and the private sector need to come together. This is about public safety. This is about keeping Americans safe here at home. There is no price that is too much when it comes to saving lives.

Cities across the United States are starting to realize that private security in public places greatly increases public safety. In one of our recent posts, we talked about Denver stepping up by placing private security officers in larger public settings, such as outdoor malls and populated streets. More cities need to approve of and implement such policies.

Some will question this philosophy with, “More security will make our country ‘appear’ more dangerous.”

This is a simple one to respond to: We would rather have more security to increase public safety and ‘appear more dangerous’, then to have less security and actually be more dangerous.

We need to increase our presence in the public. Case closed. With greater presence comes greater deterrence. Armed uniformed officers make the best deterrents. However, it should be up to the individual cities and towns the rules of private security on public grounds.

Look, we know we can’t stop all crime and terrorism. When there is an attack, we can be there to respond. Depending on the location, the local police may take a few minutes to get there. These are precious minutes. Meanwhile, private security may already be there to respond swiftly and accordingly. Mitigation is crucial during emergencies. We can help.

We want to help. We want to use our certifications, training, and abilities to keep the public safer than ever before. Private security in public locations might not prevent all terrorist attacks, but it will deter crime and mitigate disaster. The public and private sectors need to work together on public safety. We can work together and make America the safest it has ever been.

We are in this together.